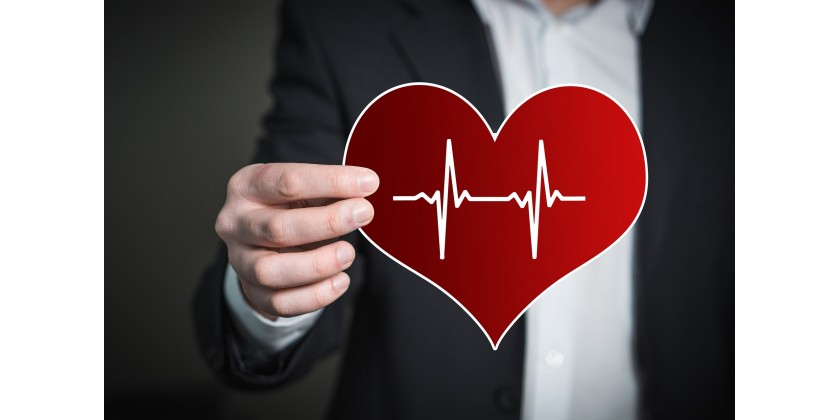 Cardiovascular disease: the role of inflammation and oxidative stress

Our cardiovascular (CV) system carries out many essential functions within the body. It is a complex system of pathways of veins, arteries, and capillaries, along with the heart, that transport nutrients, oxygen and hormones to cells throughout the body whilst also removing metabolic waste from the cells for detoxification and excretion. It offers protection to the body by transporting white blood cells, antibodies, and complement proteins in the blood to defend against foreign microbes and toxins. Clotting mechanisms are also present that protect the body from blood loss after injuries and our CV system also regulates body pH and temperature, so it is easy to understand why damage to this system can have a huge impact upon our health.

Cardiovascular disease (CVD) refers to a variety of diseases that affect the heart and blood vessels, which can include stroke, heart attack, coronary heart disease (CHD), vascular dementia etc. Their occurrence is very common worldwide, and in the UK are thought to cause a quarter of all deaths, with approximately 7.6 million people currently living with CVD 1

There are several potential contributors to the development of CVD, such as behavioural factors like an unhealthy diet, physical inactivity, tobacco use and harmful use of alcohol, which often present as raised blood pressure, blood glucose and blood lipids as well as overweight and obesity. The World Health Organisation (WHO) states that most cardiovascular diseases can be prevented by addressing these behavioural/lifestyle risk factors.2 Implementing changes to ensure a healthy diet and lifestyle can certainly help to reduce risk of CVD and in this week’s blog we look more closely at two of the greatest contributors to CVD: inflammation and oxidative stress, and consider the role of Omega 3 and a unique combination of antioxidants and their role in promoting cardiovascular health.

Oxidative stress is defined as a dysregulation between the production of reactive oxygen species (ROS) and the endogenous antioxidant defence mechanisms. When present in low concentrations, ROS plays a critical function in cell homeostasis and differentiation of haematopoietic stem cells.3However, excess ROS can cause cellular dysfunction, protein and lipid peroxidation, DNA damage, and irreversible cell damage. In the heart, ROS can directly impair the function of cardiac muscle cells, induce an energy deficit by affecting the function of proteins involved in energy metabolism and ultimately result in cardiac dysfunction and potential heart failure.4

Inflammation is a normal biological response of the body to tissue damage, infections and chemical or physical agents, in which the production of inflammatory mediators such as cytokines, prostaglandins and ROS is triggered. It is also a normal part of cellular and tissue remodelling, although for this the response is only weakly inflammatory.  If inflammation is not controlled, these inflammatory mediators are over-produced which can induce pathological processes linked to several chronic conditions including CVD.5   Continued low grade inflammation is also a contributor to the hallmark oxidative stress associated with most CVD.

Oxidative stress and inflammation are contributors to several of the biggest CVD risk factors including hypertension and dyslipidaemia:

Hypertension is a complex condition, and the most common CVD risk factor. Approximately 90% of hypertension cases are classified as essential hypertension, where the precise cause is unknown, but there is much evidence to suggest that inflammation leads to the development of hypertension, and that oxidative stress and endothelial dysfunction are both key steps in the condition’s development.

The acute phase inflammatory protein, C-reactive protein (CRP), is involved in innate immune responses and has roles that include activating the complement system and enhancing phagocytosis, as well as stimulating the release of pro-inflammatory cytokines such as interleukin-6 (IL-6), interleukin-1 beta (IL-1β), and tumour necrosis factor alpha (TNF-α). CRP is considered the inflammatory marker with the strongest association with hypertension, and it has been demonstrated in numerous clinical trials that hypertensive patients commonly have increased plasma CRP levels, suggesting that chronic low-grade inflammation may precede hypertension.

Furthermore, even when blood pressure targets are achieved, many hypertensive patients remain at risk for a cardiovascular event, which may be due to underlying inflammation.6

Chronic inflammation can trigger oxidative stress as innate immune cells, such as neutrophils and macrophages, produce ROS such as superoxide and hydrogen peroxide to kill pathogens, and an overproduction is often a major cause of endothelial dysfunction. Excessive ROS levels can also induce cellular damage by interacting with DNA, lipids, and proteins, which may further impair vascular structure and function. Oxidative damage can also go on to trigger further inflammation with CRP levels often correlating with the level of oxidative stress in inflammatory cells from hypertensive patients – so it stands to reason that any cardiovascular protocol should address both inflammation and protection against oxidative damage.

Dyslipidaemias are abnormalities of lipid metabolism characterised by increased circulating levels of serum total cholesterol, low-density lipoprotein (LDL) cholesterol, triglycerides, and decreased levels of serum high-density lipoprotein (HDL) cholesterol. High levels of LDL cholesterol have traditionally been associated with cardiovascular risk, and even regarded as a “well-established and prominent cause” of CVD worldwide, but recent systematic reviews suggest that inflammation that causes endothelial dysfunction as a result of cholesterol accumulation seems to be the key causative player for the onset and development of subsequent inflammation-related chronic disorders such as atherosclerosis, a leading cause of CVD.7

High levels of LDL-cholesterol and low levels of HDL-cholesterol, induces mitochondrial dysfunction, which in turn causes oxidative stress by the overproduction of ROS. The evidence indicates that increased levels of ROS can trigger the development of endothelial dysfunction and inflammation as seen in CVD.8

The ability of the omega-3 (n-3) fatty acids, eicosapentaenoic acid (EPA) and docosahexaenoic acid (DHA) to exert several cardioprotective effects, and therefore their key role in the prevention of CVD has been well proven. This effect is most likely due to their ability to beneficially modulate a number of known risk factors for cardiovascular disease, such as blood lipids, heart rate, platelet aggregation and endothelial function.

Increased consumption of n-3 PUFAs results in their incorporation into cell phospholipids, partly at the expense of arachidonic acid. A decrease in arachidonic-acid content means a decreased amount of substrate available for synthesis of the classic pro-inflammatory eicosanoids. EPA also gives rise to alternative eicosanoid families, with less inflammatory potential than from analogues of arachidonic acid. Aside of this mechanism, EPA and DHA produce the novel mediators D and E series resolvins, which seem to exert potent anti-inflammatory and immunomodulatory actions on the immune cells; thus, it seems that n-3 PUFAs exert a multi-faceted anti-inflammatory action in the body.9

CoQ10 has several vital cellular functions, particularly within the mitochondria, where it has a key role in the electron transfer chain, converting products of metabolism (carbohydrates, fats and proteins) into energy as ATP, but it also serves as a powerful lipid soluble antioxidant 11. In this role it acts as a free radical scavenger by affecting the initiation and propagation of ROS.  In addition to its direct antioxidant activity, CoQ10 is involved in the regeneration of the antioxidants vitamin C and vitamin E. CoQ10 is the only known lipid-soluble antioxidant that can by synthesized by the body, (via a selenium-dependent enzyme) but levels decrease with ageing and poor nutritional status and supplementation is an effective way to meet physiological requirements. 12

CoQ10 plays several possible roles in protecting cardiovascular health, firstly by directly providing energy to the heart muscle, which has huge energy needs. Heart failure is often characterized by a loss of contractile function due to energy depletion  in the mitochondria and is frequently seen to be associated with low endogenous CoQ10 levels.13

We’d love your comments on this article

It’s easy, just post your questions, comments or feedback below

Nitric oxide and ROS play a significant role in the regulation of blood pressure by means of modulation of the central nervous system, where an increased generation of ROS and lack of bioavailability of nitric oxygen activate hypertensions’ neurogenic pathogenesis. One of the possible mechanisms for hypertension is the superoxide radicals’ production, caused by oxidative stress. Superoxide radicals promptly enter in reaction with endothelial nitric oxide and produce peroxynitrite. In such a way, the bioavailability of nitric oxide decreases which results in the capacity of endothelium to relax underlying smooth muscle decreasing, leading to vasoconstriction and subsequent blood pressure increase. As a potent antioxidant, COQ10 can have a direct effect on the endothelium through increasing the bioavailability of nitric oxide, provoking vasodilation and lowering blood pressure. 14

As mentioned earlier, inflammation is an essential biological process, but balance must be achieved in immune defence by neutralising infectious organisms, avoiding a cytokine storm; the uncontrolled and excessive release by the innate immune system of pro-inflammatory cytokines, often resulting in tissue injury. CoQ10 exhibits several potential cellular functions, relevant to the balance of the immune system. Firstly, as with the heart itself, an immune response has intensive energy requirements and an adequate level of COQ10 is needed for the various immune cells to function optimally and appropriately.  CoQ10 is also able to directly modulate the action of genes involved in inflammation and may have a role in controlling the release of pro-inflammatory cytokines in disorders such as CVD, where this may be required.

There is considerable evidence from randomised controlled clinical studies that CoQ10 can mediate chronic inflammation, often seen in CVD via effects on circulatory pro-inflammatory markers such as CRP, interleukins 1 and 8 (IL-1, IL-8), and tumour necrosis factor-alpha (TNF) 15

Astaxanthin, a potent quencher of free radicals and reactive oxygen and nitrogen species is found in a variety of living organisms, mainly within the marine environment, in unicellular microalgae, plankton, krill and other seafood such as salmon, trout and crustaceans8. Results from multiple recent studies support the antioxidant and anti-inflammatory properties of astaxanthin, establishing it as a potential therapeutic agent for cardiovascular health.16

Oxidative stress is a pathophysiological process involved in atherosclerotic vascular damage and several studies have demonstrated that Astaxanthin’s unique chemical structure allows it to link with the cell membrane from this inside to the outside, making it more stable within the cell membranes, thus allowing a more efficient biological activity than other antioxidants.

Vascular smooth muscle cells, the main cellular components in arteries control blood pressure through their impact on the structural and physiological role on the vessels. In hypertension, changes to these cells can cause vascular remodelling and stiffness, in part due to the action of ROS, and supplementing with Astaxanthin has been shown to alleviate oxidative damage to the blood vessels.17

Beyond astaxanthin’s activity as an extremely potent antioxidant, studies have shown its various potential protective roles against CVD through its ability to improve inflammation by inhibiting the production of pro-inflammatory cytokines from macrophages, and modulating lipid metabolism, demonstrating reduced triglyceride and increased HDL levels in human trials. 18

Oregano (Origanum vulgare) is an herb prominent in the Mediterranean diet and has been shown to possess several bioactive properties including antioxidant, anti-microbial, anti-inflammatory, and analgesic properties. Flavonoids and phenolic acids are the main types of phenolic compounds present in oregano and have been studied due to their therapeutic potential, which has been partly attributed to their antioxidant and anti-inflammatory properties. 19

Specific to CVD, flavonoids, such as those found in Oregano have been shown to exhibit anti-platelet activity which can reduce the risk of the formation of a thrombus; a blood clot that can obstruct blood vessels and cause stroke or heart attack 29.Also, in a study of people with mildly high cholesterol, dietary and lifestyle advice was given alongside oregano oil to a section of participants who, after three months, demonstrated lower LDL cholesterol and higher HDL, compared to those given advice alone.20